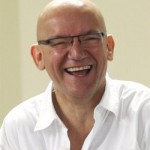 Bob Chilcott
Composer and conductor Bob Chilcott is one of the most widely performed composers of choral music in the world. He has a large collection of works published by Oxford University Press which reflects both a wide taste in music styles and a deep commitment to writing music that is singable and communicative. After a career as a singer, and twelve years as a member of The King’s Singers, he turned to conducting, and between 1997 and 2004 conducted the chorus of The Royal College of Music. Since 2002 he has been Principal Guest Conductor of The BBC Singers. He has conducted choirs in 30 countries over the last decade, recently in Russia, Canada, USA, Japan, Czech Republic, Germany, Netherlands, Italy, Poland, Sweden, Iceland, Denmark, and Norway.

Douglas Coombes
Born in Bristol, conductor and composer Douglas Coombes worked in BBC Education, writing and producing programmes such as “Time and Tune” and “Singing Together”. Later, as a freelance musician he founded the New English Concert Orchestra giving concerts in halls and schools. He directs numerous conducting courses for teachers and choral directors, performs to and with young people, conducts concerts for the UK charity Barbardo’s and is involved with many music organisations, including the Association of British Choral Directors.
www.musiciansgallery.com

George Caird
Since 1970 George Caird has combined a career as an oboist with one as a music educationalist. He taught at the Royal Academy of Music from 1984 and, in 1987, was appointed Head of Woodwind and Orchestral Studies at the RAM. Subsequently he was appointed as Principal of Birmingham Conservatoire (1993 – 2010). In 2011 he was appointed Music Director of the Rotterdam Classical Music Academy (Codarts).

Mrs Sarolta Kodály
Sarolta Kodály is the Hon. President of the International Kodály Society and oversees everything concerning Zoltán Kodály and the work of the Kodály Museum in Budapest. 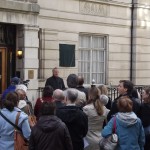 Gilbert de Greeve
Born in Belgium, Gilbert de Greeve studied at the Royal Conservatory of Music in Antwerp and in 1970 he was appointed professor there. A former President of the International Kodály Society, he continues to be active as a performer, composer and lecturer and he works tirelessly in the service of music.

Dr. László Norbert Nemes
Dr László Norbert Nemes is leading Director of the Kodály Institute of the Liszt Academy of Music and is the Head of the Kodaly Institute. He is a regular tutor on BKA residential courses.
László received his degree from the Department of Music Education and Choral Conducting at the Ferenc Liszt Academy in 1992. A student of Prof. Péter Erdei, he was the recipient of the Scholarship of the Hungarian Republic. In 1999 he obtained a doctoral degree from the University of Alberta (Canada) under the supervision of Dr. Leonard Ratzlaff. He took part in several international master classes held by distinguished choral conductors such as Frieder Bernius, Michael Brewer, Eric Ericson, Simon Halsey, Robert Sund and Jon Washburn.
Between 1997 and 2009 he worked as the Associate Conductor of the Hungarian Radio Children’s Choir. He conducted the choir at numerous concerts in Hungary, made recordings and toured in many European countries and twice in Japan. In recognition of his artistic activity with the choir, he received the Bartók-Pásztory Award in 2005. For two years he was Artistic Director of the Győr University Philharmonic Choir, currently he conducts the Choir of the Kodály Institute.
At the Liszt Academy and the Kodály Institute he teaches courses in choral conducting and lectures in Kodály’s educational philosophy, teaching methods and materials. He regularly holds workshops on musicianship training according to the Kodály concept at various short courses.
As a music pedagogue and conductor, he has held workshops, master classes and seminars in Australia, Brazil, Canada, the People’s Republic of China, Finland, Greece, Ireland, Japan, the Korean Republic, The Netherlands, The Philippines, Poland, Portugal, Singapore, Switzerland and the United Kingdom several times. In 2012 he was appointed as academic consultant in China’s most prestigious music educational institutions, the Beijing Central Conservatory of Music.
László Nemes is a member of the International Kodály Society, the Hungarian Kodály Society, the Lajos Bárdos Society and the Association of Hungarian Choirs and Orchestras, Honorary Member and Patron of the British Kodály Academy and Patron of Education at National Youth Choir of Scotland. He is member of the board of the Friends of the Liszt Academy Foundation. He is Chair of the Board of Directors at the AGAPE Joy of Music, Joy of Life Foundation established for the promotion of the Kokas-pedagogy. He actively participates in the charity activities of the Ari S. Kupsus Salon Concert Society helping young musicians of the Liszt Academy to achieve their various professional goals.