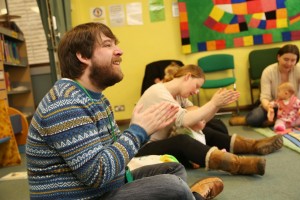 Ben manages Calderdale’s Public Children’s Library Service, a job he finds incredibly rewarding. He loves sharing his passions for music and literature with the families in and around Halifax, West Yorkshire.

Ben studied music at the University of Huddersfield, studying viola with Helen Brackley Jones, and graduated in 2008. After graduation, he continued his studies with Sarah-Jane Bradley. He is a member of the British Kodály Academy, and endeavours to apply Kodály’s philosophy of music education in all his sessions and, in 2013, was awarded the Cecilia Vajda Memorial Scholarship to further his studies at the British Kodály Academy Summer School.

Ben is an Early Childhood methodology tutor for the British Kodály Academy. He regularly presents at conferences and delivers training on using songs and rhymes for Children Centre and Early Years staff as well as Children’s Library professionals. In 2014 he was invited to speak about the power of sharing songs, rhymes and stories at an MP’s reception at the Houses of Parliament. More recently, he has recorded songs and rhymes for the charity Booktrust, for their National Bookstart Week celebrations and, with his colleague Shelley Bullas, he co-authored the chapter Music and Rhyme Time Sessions for the Early Years in the book Library Services from Birth to Five: Delivering the Best Start, edited Carolynn Rankin and Avril Brock.

Ben sings with, and is administrator for, the Northern Kodály Choir based in Huddersfield. He LOVES playing viola, and can be found playing regularly for Espressivo Chorus and the Fields Ensemble.