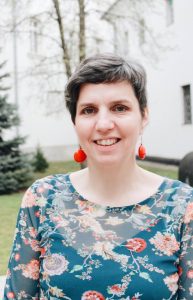 Borbála Szirányi graduated in music education and choral conducting at the Liszt Academy of Music in 1997. In her final academic year, she participated in Professor Peter Erdei’s conducting master course in Oxford.

From 1996 to 2015 she worked at the music school of the Hungarian State Opera House Children’s Choir as classroom music teacher and choir conductor. In 1999 she conducted demonstration lessons for the Kodály Institute.

Since 2000 she has regularly taught as a visiting professor at the Central Conservatory of Music in Beijing, where the Kodály programme was launched under her direction. The Conservatory’s female choir and mixed choir were founded with her guidance. They performed several concerts with both Western European and Chinese programmes, worked together with the Chinese conductor, Muhai Tang and released a CD.

In 2010, she conducted a choir workshop for the Hong Kong Treble Choir.

Since 2010 she has worked as a teacher at the Kodály Institute of the Liszt Ferenc Academy of Music and she regularly directs post-graduate courses for Hungarian music teachers. Since 2014 she has also taught at the Kós Károly Általános Iskola as part of the Mintaiskola project led by the Liszt Academy of Music. In this project she and her colleagues experiment with new music methodological techniques based on the Kodály concept in order to refresh and renew Hungarian music pedagogy, making it more adaptable to the 21 st century classroom.