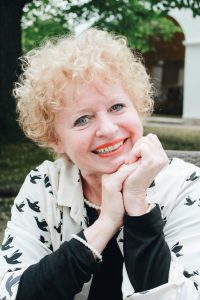 Dr. Orsolya Szabó is a concert pianist, professor at the Liszt Academy of Music, Budapest and at the Kodály Institute, Kecskemét, teaching piano, chamber music, piano pedagogy and her own creative music pedagogical method, the “SZO-System”.

Dr. Orsolya Szabó received her diploma in 1972 and her DLA in 2010 at the Liszt Academy of Music, Budapest. Since that time, her teaching vocation and performing have been parallel and inseparable from each other. She has taught at the conservatoires in Budapest and Szeged, and also at the Szeged Teacher’ Training College. Since 1983 she has worked at the Kodály Institute, Kecskemét and, from 2010, has also been teaching at the Liszt Academy of Music, Budapest.

She gives concerts all over the world: in Italy, Austria, Finland, Norway, Sweden, France, Germany, Greece, Spain, Switzerland, Great Britain, Belgium, Singapore, China, and South Korea. She has held Master Classes on several summer courses in Hungary as well as in other countries and is often asked to adjudicate at international piano competitions. She was one of the leaders of the International Jeunesses Musicales Federation and worked on Lord Menuhin’s “MUS-E” Project.

Her involvement in arts besides music is also significant. She was national champion in Rhythmical Sport Gymnastics eight times. Her experience and knowledge in this field led her to create a special movement system, the SZO-System, for musicians, which she has been teaching in Hungary and abroad since 1990.

In 1982 she received her MA diploma in Aesthetics and Philosophy, Budapest and four books of her poetry were published in 1989, 1991, 1993 and 1996. Her activity in Fine Arts is also important. She has had several “one-woman” exhibitions of her paintings, graphics, and statues in Hungary, Stuttgart, London and Paris, etc. She was awarded the prize for “Excellent Piano Interpretation of New Hungarian Works” (Artistjus) in 1972; in 1987 she received the “For the Hungarian Culture” Prize and, in 1995, the prize for “Excellent Music Teaching Career”.

Her students are very successful both in the field of performing (including winners of several international music competitions) and as piano teachers.