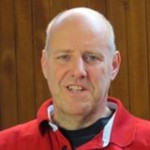 Gerard Klaassens lives in Limburg, in the South of Holland. He has a B.Ed. in Music Education and has studied solo singing. Since 1993 he has attended all the International Kodâly Seminars at the Kodály Institute of the Liszt Ferenc Academy of Music in Kecskemét, Hungary where he has attended many solo singing courses led by Dr.János Klézli and Roland Hadju.

Gerard teaches Kodály Musicianship and recorder at the Myouthic Institute for Art and Culture, Thorn and is also a music teacher at the Music Primary Schools of Hout-Blerick, Montfort and Linne. As a conductor, he directs a children’s choir, an adult choir and a concert band; his adult choir have performed in Poland, Vienna, Salzburg and Baden-Baden.

In Holland he is in demand as a lecturer in Primary Music Education and has given workshops on Kodály teaching at the Utrechts Conservatorim. Last August, he was invited to meet the Minister of Education to discuss music education in the South of Holland. Together with Paul Mestrom he has written a method for recorder based on Kodály principles and is now working on a book about music listening.

Gerard has a great interest in multicultural songs and has travelled (and continues to travel) to many different countries to collect songs.