My journey into the world of Kodály began because I had the chance to be a ‘stay-at-home Dad’ for the best part of a year. I had been taking my one-year-old son to his ‘Mini Musicians’ class, initially thinking it would just be nursery rhymes. After a couple of weeks, I realised that there was something unusually clever and structured going on in these classes, and the older toddlers in the group had some quite amazing skills for their age – such as being able to beat a drum in perfect time to music – both crotchets and quavers! This had me intrigued, and when I was told that there was a shortage of teachers on the Isle of Man to run these groups, I jumped at the chance to learn more.

The Summer School was recommended to me by a couple of people who were involved in those groups. The reports I had received from those who were previous attendees were that this was to be a very intense, brain-melting week and I would be utterly exhausted – but that I would enjoy it.

Trepidation
As a result, I journeyed to England with a large degree of trepidation. I had looked at the timetable issued to me and it looked extremely full, including optional classes in the evening! I made a decision to just try to launch myself into everything, and just power through the tiredness. I am so glad I did.

The first thing you notice at Summer School is that you are suddenly surrounded by truly inspirational people, staff and students alike. There is so much talent that the music just seems to burst through the seams of the buildings and fill every space, including outdoors. Musical groups seem to materialise out of thin air and all of a sudden you are playing jazz (for the first time) with an ensemble of people you’ve never met before, but it feels like you’ve known them forever.

Our Early Years sessions were great fun, and really got us to think carefully about the reasons why we teach in a particular way, and to critically evaluate whether or not it is working. I came back with a huge raft of ideas for my toddler group!

I had a go at conducting for the first time (absolutely terrifying!) but through some excellent teaching I was quickly put at ease and since the summer school I have even conducted a church choir – something I never thought I would be able to do. 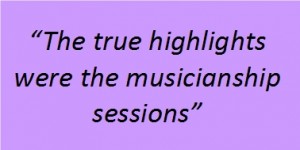 I learned all about the science of the voice, how the vocal cords work and how to use different techniques to safely achieve the notes and volume required. Did you know that singing at full volume requires far less breath than singing quietly, because your vocal cords spend more time in their closed position? Fascinating!

There were some truly moving moments. Singing ‘The River is Flowing’ with all of the students during James Cuskelly’s session was an almost spiritual experience.

‘Lightbulb’ moments
But for me, the true highlight of Summer School were the musicianship sessions. They provided some extremely taxing mental exercise, challenging me to totally rethink how I approached my understanding of music. These sessions have huge potential to cause your head to spontaneously explode from all of the intense concentration, but Cyrilla did an incredible job of guiding us through it with immense patience. I looked forward to every single session, and at the end of it all I came out with a very good idea of every gap in my musical understanding. I discovered a lot of gaps! But rather than this being frustrating, I found it utterly inspiring. Things I had found difficult for years suddenly clicked into place like a light being switched on, and there were so many ‘lightbulb moments’ I lost count. I got so used to saying the words ‘Wow… of course, that makes so much sense!’ that I drew a picture of a lightbulb so that I wouldn’t ever forget that Kodály feeling.

I returned to the Island utterly exhausted and my brain had melted as I was promised it would – but I also felt like a child who had been taken home after a week at Disneyland. I really didn’t want to leave. I could have stayed in that environment for months and never got tired of it!

Since returning, I have started using Kodály in my own violin lessons, I’m now leading my toddler sessions on my own, and have noticed that my sight-singing is improving immensely.

I am very much looking forward to returning to another Summer School soon!

Matt started learning the piano at the age of four, before beginning a lifelong relationship with the violin aged five. After completing his degree he spent nearly four years working at Avid Technology on the market-leading score-writing software, Sibelius. Since moving to the Isle of Man he has worked as a secondary school teacher, a private violin teacher, and a teacher of Kodály-based toddler classes, while managing to fit in four different choirs and running a public board gaming group!