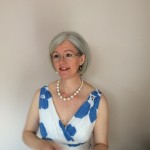 Sally is a singer and musicianship teacher living in Bingley, West Yorkshire. For many years she was a class teacher and KS2 Maths Co-ordinator.

Whilst teaching in the middle school she set up a project, working with a group of children from the local special school, and their teacher – Judith Brindle. The project involved singing and playing musical games together and was Sally’s first ‘proper’ introduction to the Kodály Concept of Music Education.

One of the aims of the project was to encourage Sally to incorporate her singing skills into the classroom. After the birth of her son, Sally attended courses run by Judith and The Voices Foundation. After hearing about the wonderful summer school from circa 1990 onwards, Sally finally made it to Leicester in 2003 and has attended the majority of summer schools since then, becoming a BKA tutor in 2014.

For the last few years Sally has worked on projects, incorporating Kodály musicianship, for the Northern Orchestral Enterprise Ltd (NOEL) in Halifax and the Sing Up Outreach Project for Bradford Cathedral and, in 2017 Sally presented a series of workshops at the Bradford Music Education Conference.

Sally teaches privately as well as singing as a soloist and in a variety of choirs. Since 2011 she has taught Kodály Musicianship in a state primary school in Queensbury, Bradford, West Yorkshire.