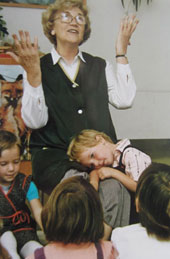 The International Katalin Forrai Award commemorates the worldwide contribution to Early Years Music Education made by Katalin Forrai during her lifetime. It also aims to encourage, inspire and reward teachers in Early Years, Nursery and Kindergarten settings throughout the world who are contributing to her legacy through their work with children and teachers today.

Closing date for the next round of nominations is 1st November 2018. Nominations should be sent by registered post to Mary Place, Chairman of the International Katalin Forrai Award Committee, 11 Cotland Acres, Redhill, Surrey, RH1 6JZ, UK or by e-mail to placemary11@gmail.com

The purpose of the Award is to commemorate the worldwide contribution to the music education of young children made by Katalin Forrai during her lifetime. It is also to encourage, inspire and reward teachers in Early Years, Nursery and Kindergarten settings throughout the world who are contributing to her legacy through their work with children and teachers today.

The Award will comprise a Certificate, and an ornamental owl which symbolises Kati’s great wisdom.

Closing date for the next round of nominations is 1st November 2018. Nominations should be sent by registered post to Mary Place, Chairman of the International Katalin Forrai Award Committee, 11 Cotland Acres, Redhill, Surrey, RH1 6JZ, UK or by e-mail to placemary11@gmail.com

The Committee reserves the right to request additional information if necessary.

On 17th March Gilbert De Greeve gave a beautiful Concert at the Hungarian Embassy in London. The Concert was part of the Zoltán Kodály Commemoration year and an important Fundraising event for the International Katalin Forrai Award. The programme comprised pieces by Zoltán Kodály and Robert Schumann. For more details and photographs of the event please click Katalin Forrai Fundraising Concert 17th March 2017

It was in the Csobánc Utca Kindergarten later in 1980 that I first had the great fortune to observe Katalin Forrai teaching three groups of children – the first aged 3/4, the second 4/5 and third group in their final year at Kindergarten, aged 5/6.
The progression within each lesson and from group to group was a sheer delight to behold, and this was brought about by the inspirational enthusiasm of Kati as she delivered each lesson in its carefully planned way. The children were so keen to participate and demonstrate their musical skills as the lessons progressed that the atmosphere still lives so vividly within me today.
Here I saw first-hand the way in which music influences everyone in an emotional and artistic way. I experienced the importance of the teacher always being an excellent role model for the children they teach, and the development of pulse, pitch and rhythm through carefully selected rhymes, songs and games.
[I was also instantly convinced that music education should start as early as possible – not just 9 months before the birth of the child, but ideally 9 months before the birth of the mother!]
Kati joined the renowned team of tutors at the BKS Summer School for the first time in August 1987 and in the autumn of 1987 she returned to the UK, and included a visit to Holmesdale County Infant School where I was Deputy Head Teacher in her programme. The children proudly participated in their normal music lessons during her visit. Children from Holmesdale also participated in the BKS weekends at Queensgate School in London lead by Kati in 1987 and 1988.
In 1988 I took up the Headship of Godstone First School in Surrey, where we hosted weekend events lead by Kati, and In August 1989 and August 1991 children from Godstone participated in a demonstration with Kati and with myself respectively at the Annual Summer Schools in Cheltenham. 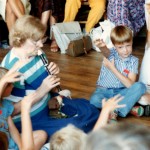 Following the 1989 Summer School demonstration, some of the children shared their thoughts and experiences:

‘’I liked the audience all around us while we sang. Mrs Forrai was very nice and helped us sing our songs’’ [Oliver, age 6]
‘’After lunch we went inside to a big hall to sing in front of all the other teachers. There were two puppets called cat and dog and I held the cat
and stroked him and made him sing’’ [Simon, age 6]
‘’We went to Cheltenham to sing and to show people how we learn music. I met Mrs Forrai and I could understand her English very easily. Mrs Forrai taught us a new song about a mill. I had a lovely day.’’ [Robert, age 6]
‘’It was lovely when we had lunch at Cheltenham Ladies’ College because my packed lunch was nice and the garden was pretty to sit in. I smelt the roses and the smell was lovely. I liked doing the singing with Mrs Forrai and I liked holding the puppets’’ [Andrew, age 6]

[I was very touched when one of the pupils whom Kati had met in Cheltenham in 1989 and later in Godstone paid me the great honour of returning from the USA specially to come to play the clarinet as a surprise at my retirement Assembly in school in 2008 and another, who was studying cello in London, came to perform at my retirement party in Godstone]

Kati was a great inspiration to me, the children whom I taught and cared for, and to countless teachers and children here in the UK, and throughout the world. I personally shall never forget her urging people to remember that the glass is always half full, never half empty, and to this day I can hear her saying ‘’not too bad’’! I treasure the memories of enabling Kati to meet the children at the schools within which I worked, and also of offering her hospitality at my home on various occasions.

I trust that these thoughts are a fitting testimony and tribute to Kati’s widespread inspirational contribution and lasting legacy to children and teachers in the UK.