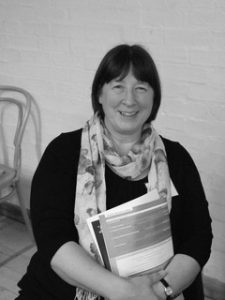 Lucinda Geoghegan graduated in music from the University of Edinburgh in 1982, completed a postgraduate teaching qualification at Moray House College of Education and trained with the Kodály Institute of Britain where she gained an Advanced Diploma in musicianship with Distinction. She worked as a secondary music teacher in Edinburgh before deciding to specialise in Primary and Early Years Music Education. She was also member of staff with the Royal Scottish National Orchestra Junior Chorus for 16 years and was Director of the NYCoS West Lothian Choir for 8 years.

She is currently a theory and musicianship lecturer at the Royal Conservatoire of Scotland working in both the Senior and Junior departments and in addition since 2011 has been delivering and assessing RCS accredited modules in Kodály Philosophy to external students. She is a regular tutor, member of the Trustees and Chair of the Education Planning Board for the British Kodály Academy. In 2017 Lucinda was elected as a Director on the Board of the International Kodály Society.

Lucinda is Creative Learning Director for the National Youth Choir of Scotland and her work involves Staff Development training across Britain presenting workshops on Kodály musicianship and methodology. Lucinda is a guest lecturer on the summer and yearly courses at the Kodály Institute in Kecskemét, Hungary and in addition has delivered workshops in Ireland, Germany, Holland, Singapore, Indonesia, Malaysia, Thailand, Taiwan, Turkey, Australia, Canada and USA